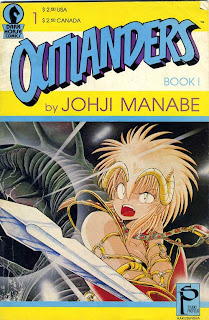 Other than British kids comics, Oink and Freak Brothers I was never a huge comic fan. Hated TinTin and Asterix. I read Dark Knight Returns fresh off the press when I was 9 as my older bro was big into American comics and that really opened my eyes but the one comic and perhaps the one panel that really got my attention was from 1988's Outlanders issue 1.

I picked it up along with Ninja High School in 1990 in Forbidden Planet. I was blown away by the cartoon Samurai Pizza Cats and wanted to see more Japanese material. The story itself is fairly standard but I just couldn't get over and I hate this word 'cinematic' flow of the action. Giant insect ships crash land into Tokyo. 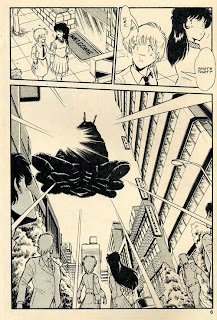 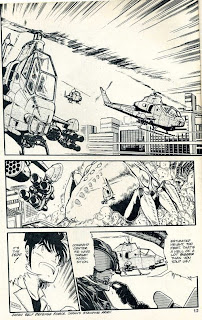 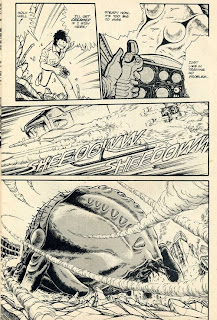 I just couldn't understand how everything looked real, the lines were all different weights and the speedlines just boggled me. Even the screen tones used to give forced perspective was something new to me. It just made me feel excited. And all drawn and written by one bloke and that really impressed me, if you draw comics you can do exactly the same thing that takes thousands of people to do with animation ( he won a small press competition to get it published so some of the art is ropey)

So after loads of pages of action, the Japanese army are using tanks and choppers against the insects and one of the alien ships shoots out a beam and obliterates a chopper. And this panel, which looking at now isn't that well executed really rocked my world. The pilot's craning head, just showing the neck and jawline blew my fucking mind!!! I can't explain the effect that one panel had on me but it started me thinking. 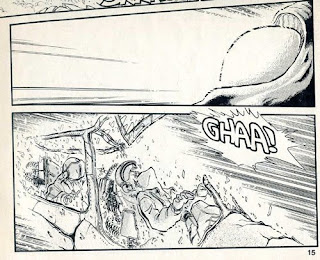 Now I don't read manga at all really but I always pick this comic up when I want to read a fantastic example of explosive action.

This was issue one, the rest of the story turned into a wishy washy space opera. My own personal wishy washy opera Spazzmoid just won't shut up
Posted by Bob Byrne at 12:16 PM

"I hated Tin Tin and Asterix"

Anything else you hate,Bob?Flowers,babies,puppies maybe?

You're dead to me.

I fucking hated them! I liked a couple of the Asterixes but in general they were just too bland compared to Whizzer and Chips and OINK!