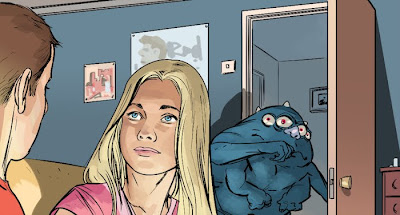 Here's a storyboard from a few years ago. It was fun to draw the Muppet style creature, plus it's always nice when I get a chance to colour my own stuff.
Posted by Stephen Thompson at 10:53 PM 2 comments: 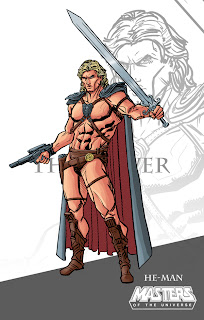 Im slightly obsessed with He-man. I think this is my first go at drawing the Movie version.
Posted by Will Sliney at 8:16 AM 5 comments: 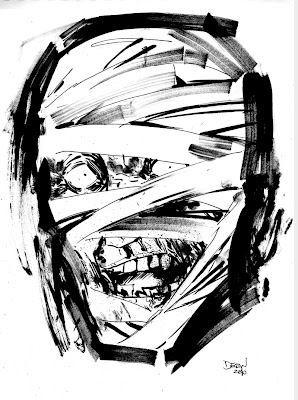 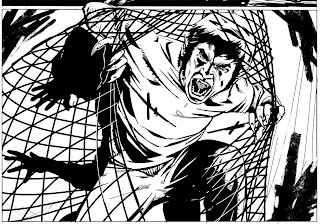 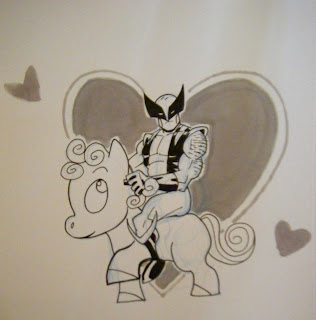 At Last: My Little Pony and Wolverine. 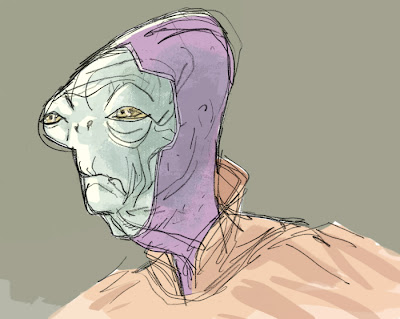 Here's a little bit of character design I did for a personal project that I'll hopefully get around to soon. Drawn with an actual olde-timey pencil and colored with olde-timey Photoshop CS.
Posted by Stephen Thompson at 9:04 PM 2 comments: 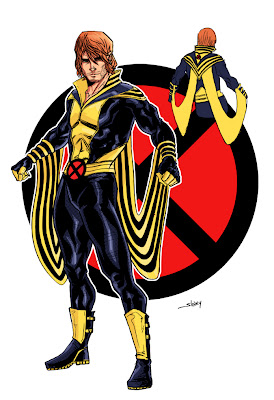 I loved X-Men first class, and I thought Banshee was great in it. I'd love to see them bring him back into the X-Books again. Dec, as much as I loved your design, I think it kind of looks like the love child of Micheal Flatley and the Dad from American Chopper.
For me I wanted to work in a practical solution for those wings / parachutes, whatever you would call them aswell as updating him to the "Astonishing X-men" Mentality that the X-Men are superheroes, (so, no, hes not wearing a Boston Celtics Jacket over it anymore.)
Posted by Will Sliney at 12:59 AM 8 comments: 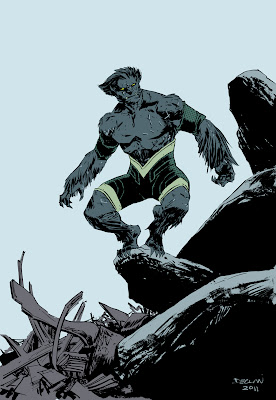 Though not an actual X-Man, here's a redesign of Dark Beast, as part of the X-Men resigns I like to do for fun (Banshee, Chamber, etc). I really like how this one come out. 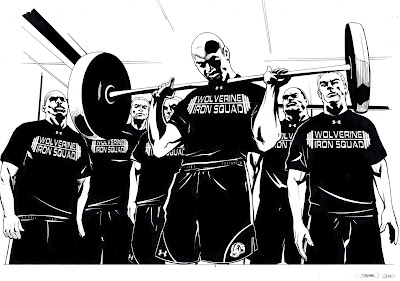 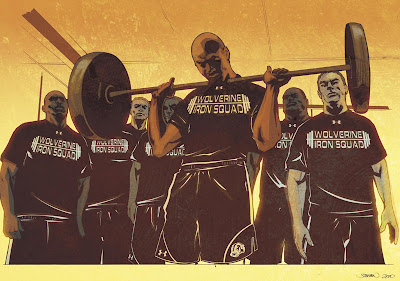 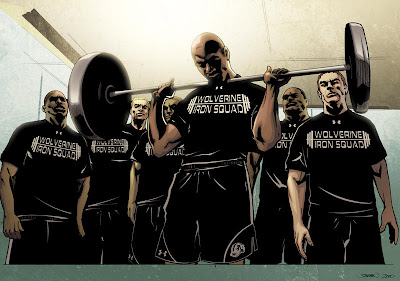 Earlier this year I worked on a series of illos for the American sports apparel brand, Under-Armour.  This is the first in the series, with 8 others. Colours were provided by the enormously talented and all round swell-feller Matt Wilson(2 different options in this case). I'll post the others on my own blog plus the coloured versions when I get a few minutes free.
Posted by Stephen Mooney at 11:00 PM 2 comments: 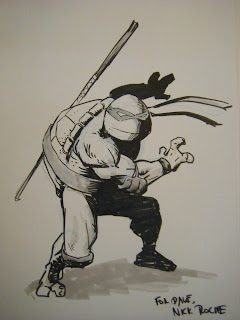 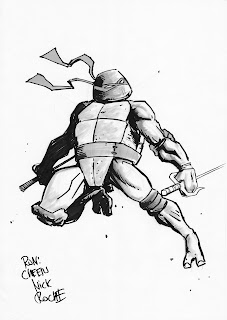 More sketches from the 2D Comic Festival. Hope you like 'em, folks. You'll be seeing a lot more from it...
Posted by Nick at 10:16 PM 7 comments:

Completely forgot I was supposed to post something today so here's another bit of Hellraiser for you.
Posted by Stephen Thompson at 1:31 AM 3 comments:

I'll be announcing a new Project soon. A backup story to a book already drawn by an awesome artist. (If only the guy could handle his beer.) For now, heres a teaser for it. 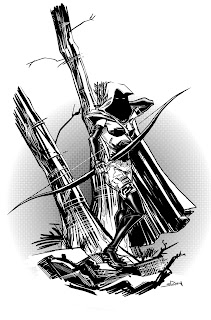 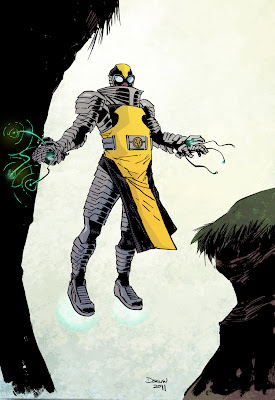 Centurius is this old Marvel character from the 70's that's now on the Thunderbolts beta-team (or Underbolt team!). I got a chance to do this modern update on him, which was great fun. If you're reading the book, you know what he looks like (or you can see it here along with the other Underbolt redesigns).

This was my first pass at him; I tried to stick a little closer to his original design but making him look more regal; kind of like a knight. Jeff Parker (T-Bolts writer) asked me to lose the helmet and goggles as he thought there was this unusual trend of black superheroes having blue goggles. Y'know what... he was right! Jeff also asked that I lose the front cape and make his face more visible. I still kinda wish I had that front cape bit... I thought it would make him more visually interesting; just to have something flowing off his stiff frame. Still; it was no big deal and I really like the final version.

Jordie helped me out on colours with this guy too. Thanks Jordie! 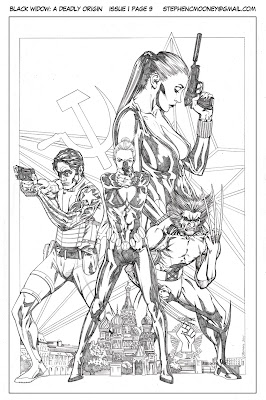 Thanks to all who turned out for the 2D festival in Derry last weekend. It was one of them good things you hear people talk about. Especially emotional was the moment the whole town turned out and crowned me King of The Micks. It was all I had ever hoped.

Here's a pub sketch from last weekend. My first ever sketch of Hellboy, for Ron Off Of The Sunnyside Comics Podcast, a frightening Big Red fanboy whose scrutiny I was under as I drew it. Hope it was worth it. 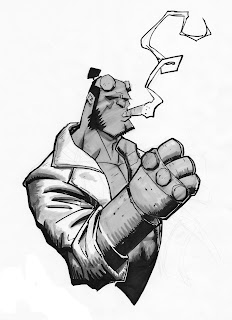 I'm doing a bit of work for BOOM! on their Hellraiser title. Here's a rejected character design from that.
Posted by Stephen Thompson at 11:49 PM 4 comments: 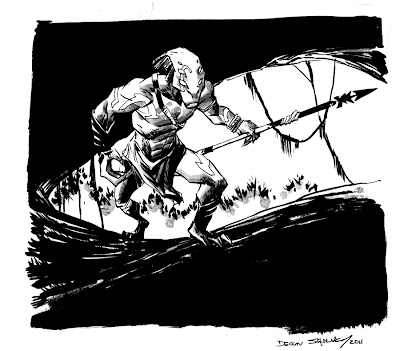 Argh! Nearly forgot about TuesDec. Have to pull out an old file for this week I'm afraid; here's a character sheet I made for the warrior creatures I had to design for Thunderbolts #154. Jeff Parker (the writer) asked me to lose the hair cuz he was looking too Predator-y.

Dec.
Posted by Declan Shalvey at 11:25 PM No comments: 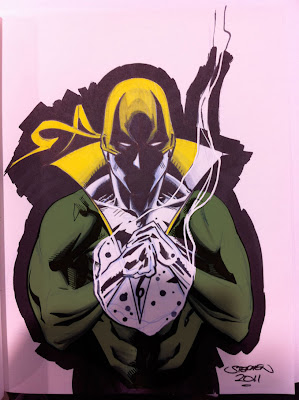 Literally just in the door from Charlotte, North Carolina, where I attended my first Heroes con alongside fellow Micks Dec and Will(and half-micks Jac, Jordie and Dave Hendrick). What a great show, well worth the trip. Here's a sketch of Iron Fist I drew for a punter while there.


Still a little bummed I missed the always-brilliant 2D con on at the same time, but plan to be back there with all the proverbial bells and whistles next year.
Posted by Stephen Mooney at 8:10 PM 2 comments: 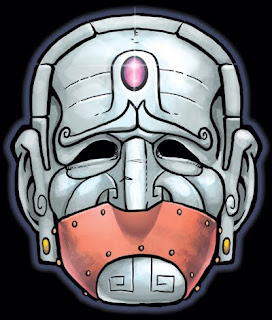 Here's a bit from Farseeker- the floating, enigmatic mute head Ulac. He's a bit of fun to do.
Posted by LEN at 11:27 AM 3 comments:

That's a pun on Bumblebee (pictured) AND the 2D Comics Festival taking place in the Verbal Arts Centre in Derry this weekend, where you can find me. I'm signing and sketching at the Arts Centre all day Saturday, as well as selling artwork from the Transformers ongoing series as well as the recent Infestation event, and tricky-to-find copies of Last Stand of The Wreckers. Head to 2dfestival.com for all the deets, peeps. Your decision will not be rued. 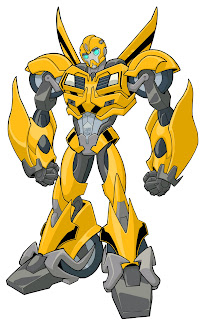 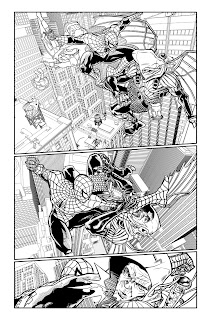 sliney.blogspot.com
Posted by Will Sliney at 4:10 PM 6 comments: