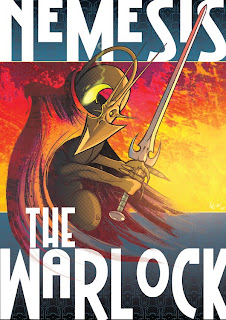 Andy Diggle posted news a few days ago of the death of John Hicklenton. I read it, got on with my day and later did my Mick sketch. It was only when I finished it this morning that I realized just how little I cared for it and how Andy's post had been sitting there, eyeing me from the back of my skull.
So I closed it up and started again.
My favorite 2000AD artists were always Mike McMahon, Kevin O'Neill and John Hicklenton. The two former were a joy to read and study- clever visuals and immaculate layouts. John Hicklenton's work was different. I remember opening his debut for Nemesis as a teenager being blown away with the textures, the tiny panels like intricate miniatures and the splatters. His work was not easy, it wasn't fun and cosy. It was unexpected- Nemesis looked rubbery, with an anatomy that well, looked alien. I was hooked- I still drag it out and marvel at it's confidence. It has a kind of energy, like he attacked whatever surface he was drawing on to just the images out of his head. The other guys may have been the kind artists that I wanted to draw like, but Hicklenton was how I wanted to draw.
Posted by LEN at 8:05 AM

Yeah, Hicklenton's stuff was really eye opening when I first saw it. He was a really original artist. Lovely Nemesis piece Len, really like the lettering too.

Thanks Stephen, it ended up being the quickest sketch so far- funny how things like that work out.

Never come accross Hicklenton's stuff myself, but I'll hunt some down on the strength of your recommendation. Used to adore O'Neill's Nemesis stuff back in the day though.
Another winner here Len, love the composition and design.