Getting Wrecked on My Birthday 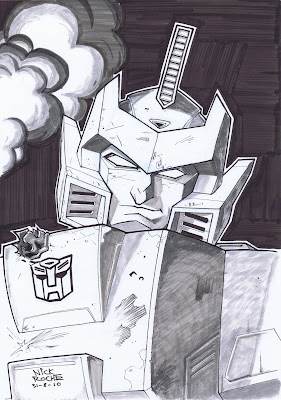 Breaking my 'No Robots' rule again this week because I've got a book to sell. The TPB of 'Last Stand of The Wreckers' is out in comic shops, and will be in proper bookshops next week. (On Friday we reached the dizzying heights of number 55 in the Amazon Books>Comics>Graphic Novels chart! Not many can say that, right?

Anyway, the TPB collects the five issues of the critically-acclaimed Transformers series written by myself and James Roberts, and it is stuffed with more goodies than your mam on my birthday. (Which is today, so clear the decks) There's a ten-page prose story written by James called 'Bullets' which is essentially Wreckers #0, two new character prodiles writted and drawed by me, a '25 Things You Didn't Know About Wreckers', an ace pin-up by colourist Josh Burcham and some sketchy goodness from Josh and I to boot. We're really proud of this one, chaps, and can say with confidence that even non-TF fans will find this an accesible and fun read. But then, I would say that.

Here's a shot of out hunky-but-conflicted hero, Springer. Done for Forbidden Planet online, so there'll be a chance for YOU to win the original in the near future. I'll keep you updated.

So by the TPB of 'Last Stand opf The Wrecker' the sooner-the-quicker as your gift to me. And maybe I won't fill your mam with my goodies.

(Big thanks to Aimee, aka Ladywreck for the amazing sig!)
Posted by Nick at 1:17 PM

Why do Transformers have teeth?

The question is 'Why do They Have Noses'?

do.... do transformers have genitals?

I'll take anthropomorphic TFs over the Bay-ified abominations (without teeth or noses and with genitals it would seem) any day. And am I the only one who collects TFs based solely on their ability to create a "Fantasy Wreckers" line-up?

I can't believe it has taken me this long to find this post... first happy birthday and second I'm glad you liked the sig.