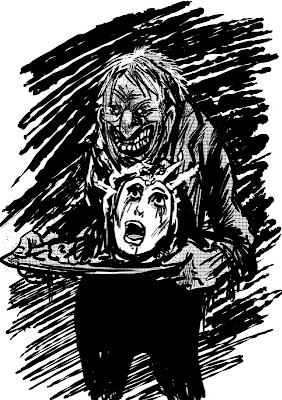 I was going to draw King's face too like Thompson as it has been remarked that is his most disturbing work. He's one wacky looking man. He stars in Creepshow as a hick that turns into a plant. He wrote the screenplay for the film and my piece is from the Father's Day story from that film. Drawn hurriedly from memory and not the massive coloured and textured piece it deserves. I love that scene.

Another double dose of SPAZZMOID out now. Zombies, sucky sucky and micro machines
Posted by Bob Byrne at 9:27 AM

As is frequently the case in these themed weeks, I like yours the best by far. Genuinely CREEPY, unlike the rest of our safe and sanitised efforts.

Bob is our very own Crypt Keeper- yay!