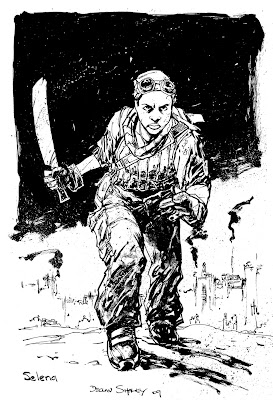 Been sitting on this drawing for a while. This is the first 28 Days Later drawing i did before i actually got the job drawing the series for Boom Studios. It's of Selena, a character from the film, and the main character in the story i'm currently doing. At the time i had very little reference to go on. In the series she appears much like she did in the movie, but i wasn't aware of that yet and i hadn't even seen the movie since it was out in the cinema. I had to go on the character description and the promotional image Tim Bradstreet had already done.

I made this extremely rough, as i wanted to make sure that a rough approach was something Boom was willing to go with. Looking over the pages i've done, they haven't been nearly as rough as this image, i think. Must work on that.

Dec.
Posted by Declan Shalvey at 2:29 AM

Really like the movement in her clothes, shows the underlying anatomy. Especially like the slight twist of her torso. She's unmistakeably comin' straight at you and means business. Lovely drawing.

Really great piece. I figured out who it was straight away. It's a good likeness.

I definitely think you should incorporate a tad more of this controlled messiness into the actual book, it adds lovely texture and weight.

Mooney, yeah, i should be messier with the pages. Completely meant to be, but they just ended up cleaner for some reason. Guess i just find it harder to do with the sequential pages rather than one-off illustrations.

Can deffo see why you got the gig without having to sleep with Mark Waid. Nice job Mrs Shalvey!

Who said i didn't sleep with Mark Waid...?

I like the messy look you use and the figure is full of life, cool.

Your grungy textures and rough, but controlled, style on this one gives a pitch perfect feel for that kind of subject matter. Top stuff! Do you use different tools when inking this way?