Who is she? Who IS she? WHERE did you find her? 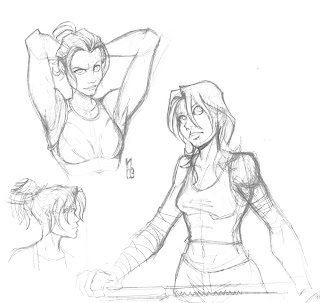 Phew! I promise I'll be a much more diligent Mick when it's not the Transformers' 25th anniversary, Dec, honest!

On that note, thanks to Stonefish Munnery for sticking my pic up last weekend, and a similarly-sized wodge of gratitude to everyone who showed up in Orbital Comics last weekend to check out the mini-exhibition and hang around for the marathon signing session. It was chips.

Fresh scraps from the sketchbook this weekend, featuring an unidentified character from my upcoming Transformers series wot I'm writing AND drawing. (...and breathe...) It's actually not 100% that she's gonna make the final cast cut at this point. (Actualy had to go back and rename her file - THAT almost gave the game away what's coming up) I've been tasked with tackling a book that's heavily populated already, but I've got a soft spot for this lass, so it's be great to see her in the thick of things. And it'd sure pretty up a Transformers comic, huh?
Posted by Nick at 4:11 AM

It's hardly the Mega Fox, is it? How the hell would she worm her sextacular way into the actual continuity?

Megan Fox, according to tabloid rumours today, is allegedly dating Zac Efron. So let me be the first to coin it: