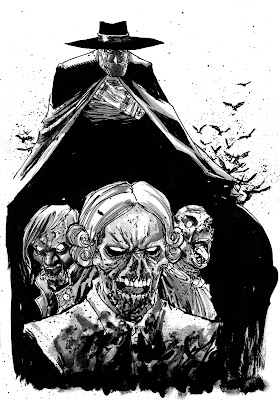 Been meaning to do this for a while.

One of the best things about going to comic conventions is meeting fellow pros. Meeting other artists who go through the same daily grind was such a revelation to me when I was really getting into comics but even better than that was that finding out some of those pros were darned great people too. One of those folk is Leigh Gallagher.

Leigh is a lovely (and a pretty darned handsome) fella who has been slogging away on his master work for the last couple of years; 2000AD's Defoe, written by Pat Mills. Leigh has been producing great black and white work for ages now, and the first collection has been released this month and I urge all who read this to go check it out. Above is my take on the main character and some 17th Century zombies.

London, 1668. It is two years since the city was devastated by the Great Fire, the inferno caused by a comet passing over the capital. But from the ashes rose the undead, hungry for the flesh of the living. Protecting the populace are zombie hunters like Titus Defoe, a former soldier who now makes it his mission to purge the ghouls.

If you can't find it in your local comic shop, check these sites for a copy...
AMAZON, FORBIDDEN PLANET INTERNATIONAL and THE BOOK DEPOSITORY

And feel free to see more about the book, along with lots of great 'making of' posts on Leigh's blog.

Dec.
Posted by Declan Shalvey at 2:04 AM

Thanks matey. It's a fantastic piece.

No worries man; my pleasure. Really glad you like it.

I'll wear your underwear, but after that; i can't promise anything.

Dude! That is awesome! I'd love to see a Declan Shalvey prog cover when Defoe book 4 comes out! Tharg... get on it!

Ha, that's great. Loving the zombie on the left with his tongue out. Little guy's got moxie.

Nice effort Mooney, but that zombie with his tongue out is on the right. You'll get it one of these days big guy...

For Christ's sake, I actually thought about that before I wrote it and everything...

Also excellent picture Dec, I like the bit of Parlov rendering on the shoulder of his cape.

Fantastic piece, Dec. Definitely going to check this comic out.

Maybe Mooney meant stage left. That's my favorite zombie too, there's something a little Quentin Blakey about him.