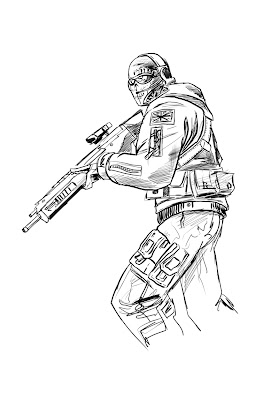 Well, I missed a day. And that fella above is to blame for it. In fairness tho, I pretty much decided to take a well deserved break from drawing over the holidays. I had a lot of friends back in Cork for a few weeks and I definately over indulged in Modern Warfare online, getting up to about level 48. Thankfully I've hidden the xbox from myself so now I can get back to drawing full days without the occasional two hour team deathmatch breaks.
As for the New Year. 2009 was feckin great. Made me totally love Cork again. This year though, ill be packing my bags and leaving for New York shortly. Hopefully for six months, along with that Dec fella, who i predict will either melt in the sun or else he'll totally adopt the abercrombie and fitch look!
Posted by Will Sliney at 11:07 AM

Cool. I only finished it last night, that Shepard is a prick.
Good luck in New York.

Great stuff Will, although if I'm being honest I'm very unforgiving about the missing a day thing...
Can't WAIT to get stuck into modern warfare 2, had A-Team all through chrimbo so still haven't gotten to try it out. Is it better than the first one? Is the campaign a decent length?
Also have Uncharted 2 lying there in its box, begging me to have a go...

He is a Bastard. Cheers man
Yeah its def better than the first one. Way more cinematic or something like that. I was never online with the first one.
Man id love a bash off Uncharted 2 aswell. No more games for me for a while though.

Yeah I think if anyone else misses a day from now on they have to give the rest of the lads a tenner each. Tough but fair.

Really...? You're blaming a video game...? Sorry lads; i can't do a post next week; i'm gonna be watching some DVDs.

(Is Abercrombie and Fitch that place with the models working there....? cuz that place is terrifying!)

Uhoh, I think Decs gonna spank me. Yup thats the place, you can also smell it from a feckin mile with all the perfume.
Thompson.. a tenner each. Thats 60 quid. i.e 10 hours comic book drawing pay!

You know you want to! In all seriousness tho, I definately think ill be taking cutting out the internet following, extra drawing break next xmas too. It was quite refreshing.

Jesus, was that a real sentence?

Then draw your pieces ahead of time like the rest of us Sliney! I wasn't online for over a week, but i posted my image ahead of time to make up for it.

That was a bit of a mad sentence.

Is this the same Declan Shalvey that shamelessly posted an image that was already on his blog just a few weeks ago,HMMMMM?
Nice,sketchy pic,Will.Good mix of the slick Avatar piece and last weeks post,which was very minimalistic to be honest.;)

Yes Luke; for shame. I did *one* time. How can i live with myself?