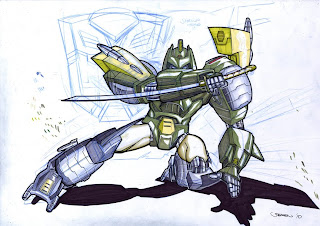 So this week each of us is tackling a character from Nick's new transformers book, 'Wrecktum Warriors', or some such. Once again, I gotta take my hat off to the Roche. These guys are a bitch to draw. I spent half the time just figuring out the logistics of where his body parts should go once I'd gotten the pose down, I don't know how Nick manages to draw hundreds of these guys in each book on any semblance of a deadline.
Good fun though! Springer was one of my favourites back in the day... 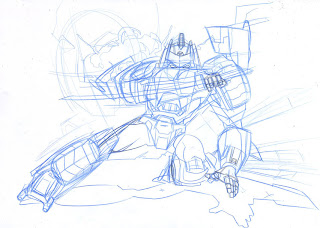 "I've got better things to do tonight than die."

PS- Pick up the first spankin' issue of 'Last Stand of The Wreckers' by Nickleback Crotch in all good comic book stores this week!
Posted by Stephen Mooney at 10:33 AM

Great stuff Mooney. I really like the results you're getting with the markers lately.

love those Magic Mooney markers. I'm going to colour my one too hopefully.

Great start to the week. Knew you could do it after seeing your excellent Starscream.

Nice one Mooney. Got a bit of practice in with the exhibition piece, eh?

Great stuff man. You always get great results from those markers.

Working on mine now. It's dif-E-cult.

WOW! Yay! Whatever happens with the reaction to the book, I know this is gonna be a great week, just 'cos of what's happening here! This is terrific, yo!The pose works a treat, and in colour too? Yer a pal. Great job!

I'll be pimping this in a few other spots later today, so expect some robot heads to start showing up soon...

Yeah, the starscream was good practise, but it ended up a tad stiff, so wanted this one to be more expressive or the like.
And no worries Nick, yer more than welcome. As Dec has just re-iterated, these things are downright hard to draw.
You make it look easy.
You make Dec look easy.

I hate Nick, these things are horrifying to draw. Nice work there Mooney, I'm liking the colour effects.

Yeah, the markers sure are your friend, Moonstone.

Oop.
I've just seen your cover to issue 1 Nick, and realised that I got the colour-scheme and proportions fairly wrongo...
Ah well.