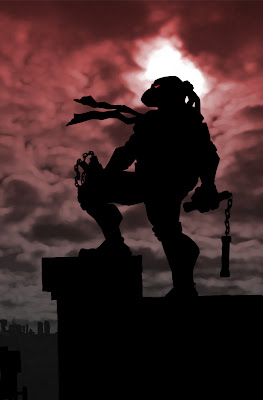 I redid my piece yesterday, Firstly because I drew Leonardo, even though Mikey was always my favourite. And secondly because I missed the point of what the original turtles comics were, i.e. comic book homages.
This here is an homage to one of my favourite comic book images and to one of my favourite turtles images.The former being Jim Lees Batman poster and the latter being a rare Dreamwave teaser poster for the comic. (A poster I badly want by the way)
I love the turtles. I can remember seeing a picure of them in the Cork Examiner before the cartoon was released here basically explaining that these guys were going to be huge. And huge they were. If you havent seen it, and if you are a fan of comics, then I would highly recommend watching Turtles forever.
By the way. im on a plane Going to sweden right now. WHeeeeeeeeeeeeeeeeeeeeeeeee
Posted by Will Sliney at 9:25 AM

I've been looking forward to Turtles week ever sense I saw it posted a few weeks ago, and it's been well worth the wait. Keep up the good work.

Also, I couldn't agree with you more about Turtles Forever. I'm a big fan of both cartoon series, and the comics, and that movie brought it all together under one roof. If you consider yourself a Turtles fan it is definitely a must see.

This is soooooo cool! That sky makes it really pop.

Still think you should have had one of his nunchuks in silhouette hanging from his crotch. After all, way i hear it Michelangelo is a party dude.