Sarah and the Fireys 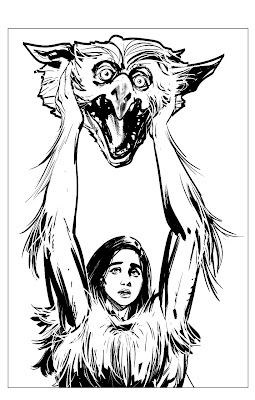 So far everybody's gone with Muppets so I thought I'd show one of Henson's movies some love. Labyrinth is one of my favourite films and also the best thing David Bowie has ever done. It was hard to single out one of the creatures from the film but I went with a FIrey, those guys who could dismember themselves and yet still sing and dance.
Posted by Stephen Thompson at 11:59 PM

I remember those crazy guys... who knew it was Jennifer Connelly inside the costume?

She's not in the costume, she's just in the background.

Nice work. The fireys used to give me nightmares as a kid. The soundtrack probably one of the best soundtracks ever.

Ah good, glad that reads. I thought I'd messed up there. Nope, not traditional; this one is pure Manga Studio.

It's getting so hard to tell... which I guess is a good thing.

lovely, Yeah having your head ripped off scared me too. But not as much as bowies tights.

Love that movie too.

Me and you are secret bruddas from a diffrent mudda Thompson, I'd have gone with the fire gang too. Classic.