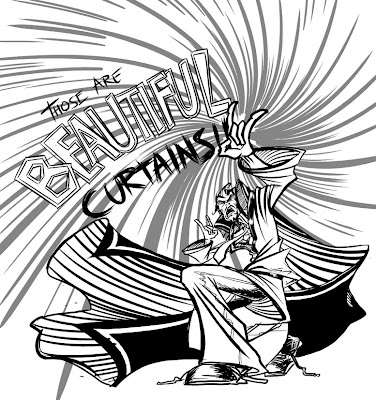 Well then, After finishing the first season of Venture bros I was highly skeptical of the show. The here I am, one week later drawing one of the characters from it. Season two struck like getting whacked in the face by a fresh mackeral off ballycotton pier. Its just brilliant, and probobly retrospectively makes season one better too. Great show, a lot of priceless lines in it.
This was done really quickly and losely actually, I wouldnt mind ending up somewhere halfways between my regular stuff and this.
Posted by Will Sliney at 1:09 AM

Wow, I thought this was a Nick pic for a second. Nice loose work there, would be great to see some of this leak into your pages.

Eric Canete eat your heart out. Nice one Will

Heh, i doubt Canete is losing a winkl of sleep over this. But yeah I like elements of it. Cheers Tom, i hope you can hear his theme music in the background

I too thought I'd missed a few days and Nick had stepped in. Really like this Will, nice and loose with a really strongly grounded pose. Also totally in character for the magnificent Orpheus, one've the best characters on the show.

Ah man, this is class; like a weird mix of Bob and Nick's stuff. I'd love to see your pages look a bit more like this. Glad you like the show too; we've been harping on about it for ages.

"Do not be too hasty in entering that room. I HAD TACO BELL FOR LUNCH!"

Burgeoning Venture Bros here in Roche Towers these days. Woulda gotten more into it, but my brother swiped our DVD playing device. This is a nice departure for you, Will. If you enjoyed drawing this way, you should give it a whirl more often. Lotta energy in this, man, good stuff!