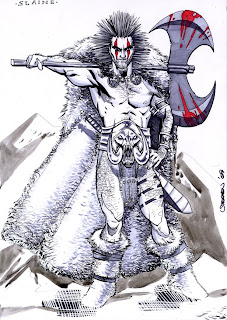 Tried to put a decent bit of work in this week after my last half-assed effort.
Here be Slåine, The Horned God. I remember when this series was running in 2000AD back in the day, and myself and Thompson were utterly blown away by Simon Bisley's incredible artwork. Is there a better one-two-three punch in the history of comics art than Bisley's work on ABC Warriors, Slåine and Judgement on Gotham?
At the end of the Slåine storyline 2000AD brought out a lovely hardback collection, which Thompson bought. He agreed to sell me his issues where the story appeared originally since he now had the collection, but when he brought them over to me he'd torn all the Bisley covers off them as he reckoned that that wasn't part of the deal.
Bastard.
Still, not as bad as that time he sold me 4 sheets of bristol board for ten pounds...
Bargain.
Posted by Stephen Mooney at 12:54 PM

Who is this Thompson fella, he sounds like a right fecker. Hey are those Adam Hughes markers You used to colour the sketch?

Well they're copic markers alright Will, same brand Hughes uses, but I only have the cheaper hobbyist ones whereas he uses the pro versions. They're pretty pricey so I'm practicing a bit before I buy some.

Ah class, Ive been intending getting my hands on some of them.

I think you doth protest too much...sounds like somebody has a little crush on Tommy Thompson. This pic brings me right back to the early years though, good times.

This is gobsmacking, Mooney. Fucking incredible.

hope you acted grumpy,like adam hughes was when i met him,while you drew it...
but!
good as simon bisley was,and he was good...
nobody does slaine like glenn fabry,come on!
the sacking of colchester...
that was an awesome episode,and he rushed it!

Looks like you've, once again, drawn a picture of yourself Mooney........granted with less clothing this time. I have a feint memory of admiring this in 2000Ad.....though never gave much thought to the person who's slaved over it.