So, I realised this week that this month marks the fifteenth anniversary of Issue #1 of Captain Ireland. "What is Captain Ireland?" I hear you collectively murmur. Well, Rocheteers, prepare to learn (at length) of a secret chapter in my comic book career... 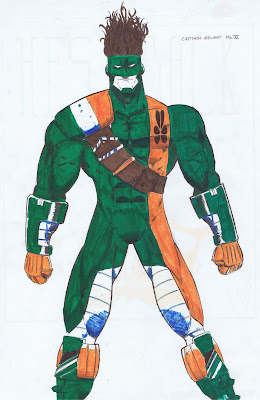 In 1995, I approached the local Arts Office looking for cash to self-publish my own superhero series, set in the far-flung future of Wexford, 2010. The previous year, I had cobbled together a photocopied anthology series called 'Alternative' with two school chums (Wayne Daly and Lee Kelly)featuring our own home-grown superheroes that shared a universe, Image-style. Captain Ireland made his first appearance in the one and only published issues (though we got as far as completing #3)along with Buzzer, and Razorblade, and the comic became a mini-cult happening, gaining us an interview with on the Pat Kenny radio show. (Weirdly this inspired a printer to call in and offer us our own professionally printed superhero team book. We realise now he just wanted his company's name broadcast on air, but we had meetings and he asked us to cobble together a first issue to go to print in under thirty days, in the same month we were due to sit our Junior Cert exams. Having completed the project, and almost failing the exams, we traipsed up to Dublin only to be told it was a no-go...)The other two lads lost interest, but I smelled glory, and if there's one thing better than the smell of your own farts, it's glory... 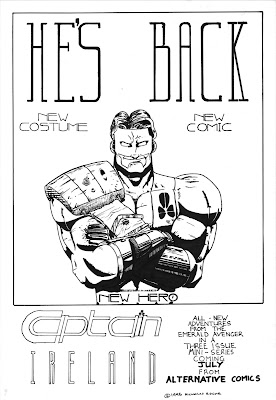 So I decided to have Captain Ireland go solo trying to solve the case of local businessman - turned - bodypart cleaving serial killer Abattoir. Why was he called Captain Ireland? Fuck knows. A hubristic delusion that MY superhero must be better than everyone else's in school (When it was clear that Wayne's Razorblade held that honour)was probably the basis for it. I name of my home country was the sum total of my knowledge about the place, and kind of all I wanted to know. But I think part of me knew that it was an easy commercial sell. 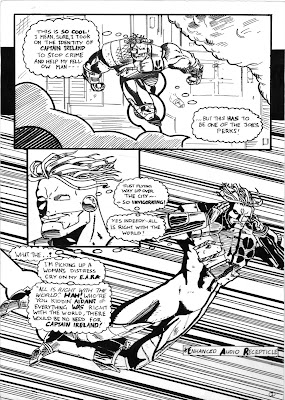 So Lorraine Comer, local Arts Officer, greenlit the comic's production, and with full use of the local County Council's printing presses too! Woop!In the time-honoured style of a comics publisher, she wanted the comic to go into production immediately, whereas I had planned to stockpile the three issues of the mini-series. The reason for this was that it was the start of the summer, and she rightly reckoned the comic would sell well to tourists. Americans sucked this puppy up. It got a big launch at a local summer festival too, so it was on the radar of the unsuspecting visitors and townsfolk attended. It was my first and best summer job; having my own comic bankrolled and getting to keep all the profits for myself. 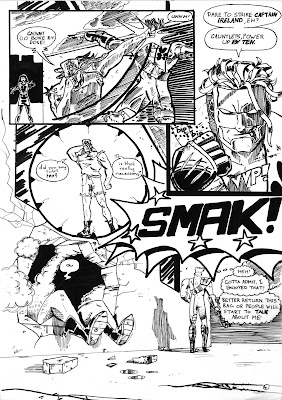 Local shops and newsagents carried it, and even Kevin in Forbidden Planet stocked it, all taking the smallest of cuts. (I think the RRP was 75p)That was the worst thing; distributing the comics and picking up leftovers, and/or the takings, but there was a kind of buzz around town about it. Lots of local press and radio coverage. It even got a mention on late-night RTE weekend show The End, or so I hear. 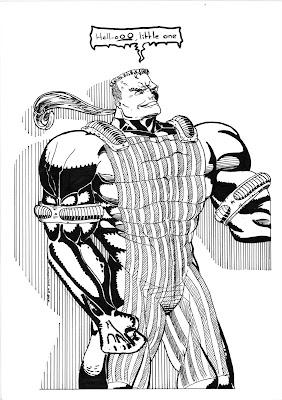 Sadly, only two issues got produced. September came crashing upon me as I tried to finish #3 while going into my final year at school.I got about half of it done, but because I'd missed my monthly production deadline, I figured I'd just have to discontinue it. I didn't realise that it was the nineties, and late comics were in vogue. (And that in 1995, a comic late by one month wasn't even considered late.) There are elements from the comic that still live on in my brainhole, that I think could breathe again in some form. But either way, it's still a massive deal that I managed to get something like this off the ground (with a lot of help) aged fifteen. 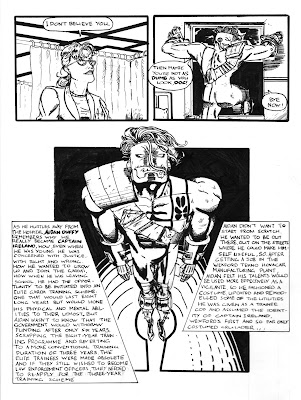 Now I understand why people are always saying they preferred your early work.

Nothing beats the joys of self- publishing, except maybe getting a steady paycheck.
Yiu can see the love and enthusiasm in every page. Great stuff sir.

Must dig up my early attempt- a home made comic called The Watcher.

Cheers Len! We should have made this a theme week; I'm sure we've all got similar stories of creator-owned teen nonsense.

lol had my own Captain Ireland also when I was scribbling in copy books, think he made into a UK indy comic as I was hired in school by mate to draw it, good times. Funny enough mine wasn't so Liefield lol more Davis
Self publishing is the way to go if you have a gem idea niggling at ur skull, I did and it's an adventure in its self

Hahaha I love this. Love it. I want more Captain Ireland please!!!!

Would I be brave enough to publish my 'Poison' pages on this here blog...
Methinks I should follow in brave Nick's footsteps!

Man alive, great to see this stuff Nick, I'd kind of forgotten how much work you'd put into making that stuff happen. Did you tell me not too long ago that you found copies of Alternative stashed in your attic? What an appallingly cringeworthy title for a comic. But I should be thankful for it setting me on the road to self-publishing. Would be strange but interesting to see it now. Forgot about that Pat Kenny interview too. My 14-year-old self could never have imagined what a twat he is.
I think the rights to Razorblade* now reside with Pat 'Daddy' Sinnott (by way of a verbal contract), which given his upcoming circumstances, he could perhaps try to flog to a film studio. It couldn't be any worse than that load of old Twilight cock.

* A fact that no one wants to know is that Razorblade was originally created for a Blue Peter 'design your own superhero' competition. I didn't get anywhere but did catch a glimpse of the drawing on their wall of entries.

Ha! I love it! Yes Nick there were a few Captain Irelands floating about at one stage I think. Did I hear you on Rattlebag talking about it years ago?
I love this kind of stuff. More please

howaya. good to see the Captain in action. If you are interested, there is also a "Captain O'Ireland" doing the rounds on the web. Find him at
charredarmour.com.
ta
c