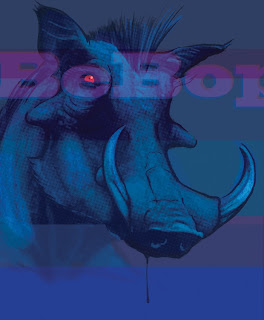 I entirely missed out on the TMNT cartoon, though the comics were fun. For something so oddly subversive and underground at the time, it was weird to see them get turned into wholesome Saturday morning cartoon fare. My doodle was of Bebop, the warthog Mutant (apparently he was created for the show, which was a bit short on other mutants). He was typical inoffensive cartoon stuff: closer to Miss Piggy then the real thing. I had precisely zero time to give to this- wish I had more time to hammer this into a decent idea, but there you go.
Posted by LEN at 8:49 AM

Where are his hip shades? Do yer research O'Grady!

Seriously though, very nice piece. I like the blue.

And where, exactly, does one perch such a shades, considering the location of a warthogs ears?
:)

This is fantastic! Always loved those guys from the cartoon. Nice job on this piece.

you'd have to redesign the shades with wrap around leg pieces to hook onto his ears.... I thought that through too much didn't i?

Jackie doesn't know what that means...