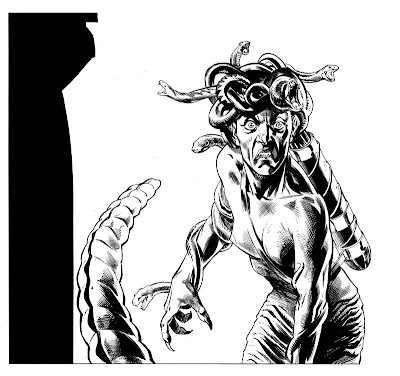 I had this pencilled before Dec put his up so I apologise for the doubling up. Harryhausen films are up there with Star Wars and Indiana Jones in terms of childhood influences with me. The Medusa from Clash of the Titans is one of his best creatures and I love how he pushed her design by making her a half-snake creature rather than just a woman with snakes for hair. The scene itself is a masterclass in moody lighting and suspense, two things modern genre film makers seem to have forgotten how to do. It's like they're terrified that if they slow down for a moment their audience will get bored and leave.
Posted by Stephen Thompson at 11:58 PM

Really nice, are you using a dip pen for the tiny crosshatching?
Pity you cropped the figure where you did, would've been nice to see her snake body.

On the plus side, this week definitely has the highest quotient of scaly snake-lady boobs this year.

Nope, it's all just brushy goodness on this one.

We shall watch your career with great interest, young Thompswalker.

Jesus Thompson, way to show me up!