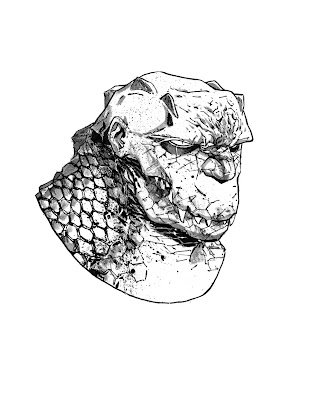 Since Thompson figured out that 95% of his Micks pieces were headshots, i realized i've only posted two headshots on this blog so far. So, here's a new one; Killer Croc, a villain from Batman's Rogue Gallery.

This drawing is heavily inspired by the version of Croc i saw in the brilliant animated series from the 90s. I had never seen/heard of him before the cartoon. I believe the design was by Kevin Nowlan, and i can see the Nowlan influence in this sketch. I also looked up some reference of crocodiles to get some extra texture detail. That's when i realized how good the design Nowlan came up with was. The construction of his cheekbones and jawline really mimics the features of a crocodile's head.

Dec.
Posted by Declan Shalvey at 2:41 AM

Class Dec!! looks like a design for a model bust. maybe someone will see it and make it up. that'd be coooool!

Love this, favourite Dec piece in a long while but then I'm a sucker for the creature stuff. Looks really nice small, actually.

That effing rocks Dec. Treat yourself to a Jaffa Cake.

Thanks lads. This ended up much better than i thought it was gonna be. I don't think i'm especially strong at the creature stuff, but this turned out surprisingly well.

Well in fairness, you turned out surprisingly well

Thats almost as cool as the killer croc from Arkham Asylum the game!

That's quite the compliment Will, considering the hard-on you have for that game.

Ah man, i cant wait, its out in about a weeks time. Its the only good thing out that week too

Heh heh. You're probably right' i sure can't think of anything.

So you're too nonchalant to reply to my emails already Declan. Quit rubbing our noses in it. Or maybe my gmail's been misbehaving.

reminds me of an ex.

There was a girl in Wexford Panto a few years back nicknamed Killer Croc and people would shift her for obscene amounts of pooled cash.

This picture is a lot sexier than her though.