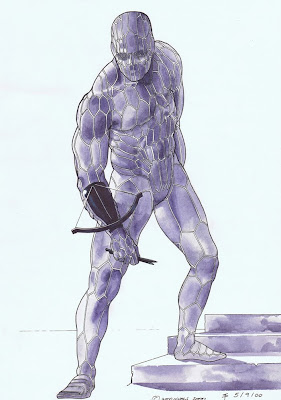 Here's a reeeeealllly old one from a decade ago. Once upon a time Mooney's brainy brother created a computer game and a few of us did some character designs and the like for it. I think we even did some cut scenes too. I think this guy was supposed to be an assassin or something and all those panels on his outfit helped him turn invisible. I have no idea why he's posing like some half assed statue though.
Posted by Stephen Thompson at 12:20 PM

Fantastic design and execution. Always liked this guy. Maybe I'll continue the theme by putting some of the other designs up. Or maybe not, depending how badly they've aged...

Looks great. What kind of game was it? "Super Mooney Bros." You should put it up for download.

I know I'd buy it. Am I the short fat brother or the tall skinny one? I would like a nice pair of dungarees...

Oliver would clearly be Luigi so that leaves you as Mario. You could grow the mustache in about three days.

more than a decade ago Bompso. Try 14 yrs ago! I still have two of the characters I did. Great stuff!