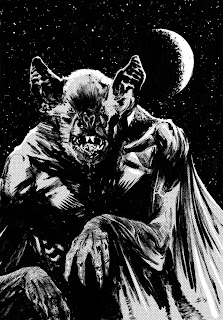 Who I've drawn in space here, apparently, now that I look at it. Batman has the best rogue's gallery in comics by miles, and I won't hear any of this Spider-Man nonsense. Doc Ock is alright but Electro? Green Goblin? Bleh. I don't think I've ever read an actual comic with Manbat in it but I liked him in the old animated series. He would have made a way better sidekick than Robin. Batman and Manbat. Awesome.
Posted by Stephen Thompson at 8:30 AM

This is great Stephen. I love the half tone.

Marry me. That is by far my most favourite thing you've done.

This is rather excellent.
Goddammit Thompson, I was just gonna half-arse another sketchy number next week, but you guys and your ridiculously finished pieces are kicking my ass!
Effort it is.

Christ Thompson; you've outdone yourself this week. Really like the composition, the black eyes, slobber and the contorted shoulders.

Lisa can live with us.

Batman and Manbat wow well ya know what to do if ya ever work for dc! drive that concept down their throats!!!