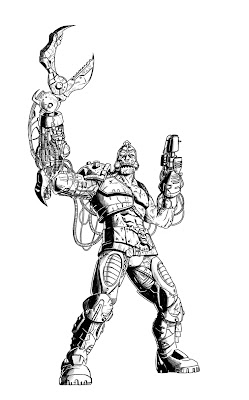 The He-man bus is well and truely chugging along now.
This is based on the mighty Four Horsemen Redesigns for the He-man relaunch of the early 00's, all of which were really really well done. It was actually a pretty good cartoon, I dunno how many of the Micks would still be into the cartoon side of things but I certainly am, Its how I got into comics really. (I didnt have Fran calling around and giving me them as a young fella.) Infact, the first time I walked into a proper comic shop I was about 20 yrs of age.
On the subject of cartoons, anyone out there watching Wolverine and the X-Men, first season was pretty damn good but seeing the ending to it, where there gonna go for season two looks pure class, something I never thought Id see as a cartoon.
Posted by Will Sliney at 12:08 AM

Really strong piece Will, probably my favourite thing you've put on the blog. First couple of comics I bought in Forbidden Planet were actually Turtles comics. Oh and I know you'll hate this but I think this drawing has a hint of Declan about it...

Haha, really? I was trying to work in elements that PJ showed me when he inked the Boba Fett during the week.

I'll be honest; i have absolutelly no idea what that is Will, but the drawing sure is purdy. I can see you went to the effort of refining this a bit more than the other pieces. Works well.

Dunno if effort is the word really, that character just has so much detail on him its kinda impossible not to go to that length. Theres def more work gone into the shadows and stuff but I would sometimes prefer that to be done in colour

EASILY your strongest piece in my eyes Will. Strong, well-grounded posing, great anatomy, nice line variation all over the place, well-considered draftsmanship throughout, and nicely shadowed here and there. Were you maybe a bit influenced by Dec introducing the grey tone stuff into his pieces? It works for you either way.
Is this drawing done on paper? It seems so much more organic than your previous pieces.
Love it.

Nice. I think people are seeing a greywash in the drawing, which, I suspect, is actually thin lines that have have been reduced into a sort of greywash in the scan/resize.

Inking looks a lot more focused - much more in support of the picture than the previous sketch.

Good job all round :)

Your spot on PJ, Thats exactly what it is

The variation in line is really paying off.

I probably can't articulate it quite as well as the others but I really love this - as they said it's strong & so detailed, you can see the work that went into it, shading everything. :)

best piece you have done yet, easily my fav good job and great worK

Beautiful stuff, Will. Never saw the He-Man redesign stuff, but this makes me nostalgic for the days of Warhammer Monthly and all that grim meathook futurey cyborg nastiness. This guy comes straight out of "Necromunda".

Ah man Necromunda, that takes me back. I bought that thing, never played it, but got my moneys worth outta looking at all the art in the instruction book

Love Trapjaw, love detail and love this. Have to file in behind the other woolen ungulates and declare this yer best yet. God the 2002 MOTU rocked, right?

It was, such a pity they didnt get to do a season 3. The idea they had for that was pure class with the Horde taking over Eternia and the Masters being on the run

Freakin sweet...Trap Jaw really was the most awesome of all the He-Man figures...never saw the remolds but this image blows me away.