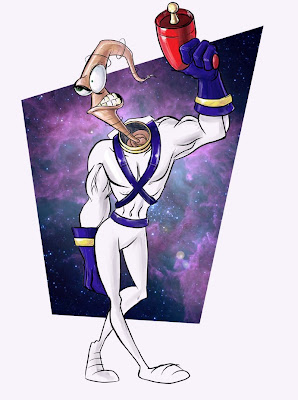 Easily one of the best characters created in the 90's I used to love drawing Earthworm Jim over and over again, day after day. I figured that since all the Micks here are older and would associate "Grooooovy!" with the Fonz or something that id share him with them.
I actually used to have these really innappropriate (but hilarious) posters when I was about ten years old for the Jim Gameboy game featuring slogans like "now you can play with your worm in public." There was a whole series of them, id love to track them down now some how.
I actually wasnt intending colouring this but ended up mucking about with the colouring pencils in Manga Studio and ended up colouring it that way. It was a whole lot of fun but id never do it for anything bigger
Posted by Will Sliney at 12:10 AM

I love this Will, possibly my favourite of your micks pieces. Great, jaunty pose, nice clean lines and really sweet colouring. We actually were big fans of Jim back in the day, Thompson did a lovely little pic of him back in school which to this day is stuck on the outside of the fusebox in bayside.

To use a well worn out phrase ..This is my favourite Will piece yet. It's all about having fun innit? I'm drawing an old game thing this week too

The game was bastard hard on the mega drive. Never did see the end of it.

Oh no you didn't! That's beast Will! Yeah I could never finish this on the Sega either.

Heh, yeah Bob whenever I see that phrase i tend to gag in my mouth just a little. Rock on old games. Dec I completely forgot that Homer was the voice of Jim. Still its all about the games where they came from which were just brilliant. Man John, you really shoulda played through to the end. That cow you launch in the first level finally lands and kills you when you finish the game, hilarious stuff. Mooney I want a photo of that Jim Piece up on your blog, stat!

Aww Liam, dya wanna pass me the controller and Ill pass the really hard bit for ya


Tennapel's comic books are worth a read too; Earthboy Jacobus a very sweet book, and Iron West has cowboy robots.

Never played the game. To be honest, when i was watching the cartoon as a kid, i had no idea it was based on a game. I just loved how off the wall the show was.

If you ever listen to Evil Jim he sounds just like Krusty.

Heh, i'll have a look for the Jim drawing when i go downstairs to have my lunch.

Take a photo Dec willya and post it up

Ps, Speaking of games, check this out. Its a game featuring a grandfather of one of the eclectic micks.
http://www.gametrailers.com/video/gc-09-the-saboteur/54389

Ps. Paulf, must check out those books

Frickin' cool Will! Aw, I used to love Psy-crow. I never had a Sega, but I used to play the game in Quinnsworth, that and Cool-Spot.

You could play the Mega Drive in your Quinsworth? Class

re: that video game, an irish man in paris. 1) what the hell kind of accent is that and 2) what the hell is an AK-47 doing in Paris during the war? Not a huge amount of historical research going on there...

Sweet I love Earthworm Jim!
And that's a fantastic drawing of him :)
(still have the SNES game downstairs!)

Dec you never knew it was a game?!! Holy Moly. I cleared it too.

PJ that's an mp44 in that ridiculous piece of shit game trailer. So there.

Hey its got Flogging Molly in it.

I didn't know it was a game when i was a kid Bob. Found out soon afterwards.

Like all the cool kids, I reckon this is the Best of Sliney. Great finished piece, Wilburforce.