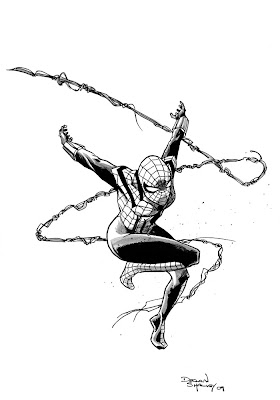 Here's another character i've never drawn before, nor did i ever think i'd end up drawing.

Never read the Spider-Girl comic (aside from the first issue, i think), but i always liked the costume. When i was getting into Spidey comics in the 90s it was during the 'Clone Saga' when Peter was replaced with a clone of himself. The clone had a revamped Spidey suit (designed by Mark Bagely i believe) and i loved it. When the clone was enevitively killed off, the costume was used for the daughter of Spidey in a possible future... or something. Ah who cares, i just like the costume.

Dec.
Posted by Declan Shalvey at 3:39 AM

Nice. Answer me this, do the webs come out of Spideys arms or is still the little machine that he invented?

I notice she has things on her wrist, But it could be for make-up, her phone and tampons.

Out of the web shooters. It was out of his arms for a while, then they went back to the doohickeys.

The web shooters are on the outside on this costume, but she can also put her phone, make up and the like in there i'm sure.

God help you if you're a citizen who needs to be rescued at 'that' time of the month . . .

The one with the ripped hoodie? No way! This costume rocks. Kinda spidey crossed with Venom.

Ben Reilly was the Scarlet Spider (one with hoodie) but when he took over as Spidey he wore this costume. This sweet costume.

Good stuff,Dechead.
But I thought Spidey shot that gick from his wrist instead of a
fancy gizmo?

Haven`t read any spidey in ages.Perhaps a TPB collection shall I seek.