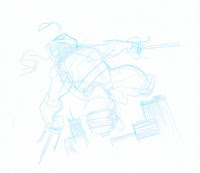 Was rattling off this little Raphael when I realised I've got a folder full of more accomplished Ninja Turtle pieces from when I was warming up for the Titan gig in 2007. So instead of persevering with a new experience, I present to you the Turtles as they appeared in the surprisingly-not-shit Fast Forward iteration of their animated series. 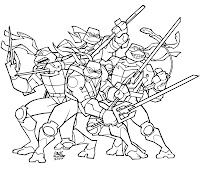 Love em both. Please finish the Raph from the first one, pose looks gravy.

Yeah, do finish that first one; it look like it'll be a good 'um.

older pic is sweet, would love to see it coloured.