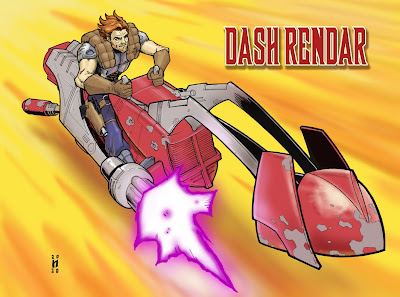 If I could have changed my name when I was seventeen years old, it would have been to Dash Rendar.

I just totally bummed Shadows of The Empire. It came into being around the time I got frighteningly autistic about Star Wars, and having not been fully aware of the original releases as they came out, I felt like this was a unique jumping-on point with in which to immerse myself. The idea of sequels and Expanded Universe malarkey was such a novelty back then, that I was Xucked in by Xizor and the rest of the cast. I'd love to see this as an animated feature - a la Clone Wars - someday, but I'm half afraid George would bloody do it.
Posted by Nick at 9:56 PM

Deadly. Really great pic. Thats a poster right there if I ever saw one

Yeah, this is above and beyond. I'd love to see it as a poster!

Sweet! I loved Shadows as well, and it's still the only piece of the Extended Universe Star Wars novels I've read. It seemed to fill in all the blanks I had never considered before between 5 and 6.

Years later I found an action figure of Prince Xizor in Forbidden Planet and picked it up. I still have him somewhere. And I would love to see a cartoon of the story, especially if it has the team behind the Clone Wars series on it.

There's a 'making of' Shadows of the Empire' book that's really good. It's chock full of Kilian Plunkett designs and comic pages. I loved his take on Dash Rendar, all filthy and ugly so I was really disappointed that they went with the Han Solo with a beard look.

Wow, fantastic image man. Lotta work in there too. Kudos.

Thanks, homies! Definitely got carried away this week. There are no pros to procrastination; only cons...

Thompson, I dug out that book from my folks' last weekend in preparation. So glad we got a book like that for the protean mega-event that was Shadows. Plunkett rocks my Outer Rim Territories.

Like Denis, SotE is the only extra-curricular bit of Star Wars I've dipped my toe into, and I feel my life is all the better for it.

Fantastic pic, Nick! Brought me back to a time when me and my friends were bat shit crazy about this. It felt huge at the time! Playing it on the N64, reading the book, listening to the soundtrack to a non-existant film.