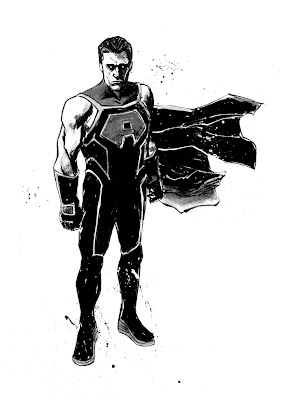 Hello there. Above is a character sketch for a project i've been working on for the last few months. Myself and uber-talented writer extraordinaire Simon Spurrier (of 2000AD, Marvel and Gutsville fame) have been developing a series for a while now. We’ve had some interest from publishers of late and we’re doing all we can to get it off the ground. The project does involve superheroes so i've been doing a lot of work on the side trying to design them. Some characters have fallen by the wayside, (as hinted on my own blog) however some characters have needed a complete reboot, hence this new sketch of Absolute (the main super-guy in the story) this week. Can't say this is the final version, but i reckon it's nearly there.

I'd also like to congratulate my fellow Micks as today, being the last day of the month, means we managed to post an image EVERY SINGLE DAY of March. Fair play lads. Lets keep it up. It's lookin' great so far.

Dec.
Posted by Declan Shalvey at 1:46 AM

This isnt Oscar the Grouch??? I like this Dec. Very Foreboading without going over the top

Yeah, lovely menacing vibe. Great drawing too, you're really getting that new style of schmutzy finish working for you.

greatr job, especially the shapes with the cloak.

Good stuff. Kind of reminds me of the re-designs that Gary Frank did on Superman recently, by way of Paul Azaceta. I like how you're even adding splatter to character designs now.

love this Dec. What are you using for grays?

Thompson; when was that redesign done? Must take a look at it so it's not too similar. I like the 'by way of Azaceta' bit though.

Oh, he didn't redesign Supes himself, just the Legion of Super-Heroes.

Oh yeah, i know the one you mean; the one i got a lend of recently. I was actually thinking more of Bryan Hitch's 'Ultimates' designs, ie, everything in a kind of black leather with a lot of seams.

can't get 'absolute' by scritti politti out of my head now.

A great song, but 'Asylums In Jerusalem' is better!