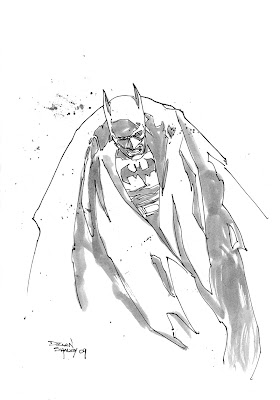 Anyway, since i've worked a fair bit on my sketches so far, i thought i'd change things up a bit and do a really loose Gambit drawing (as i've been hinting at an X-men drawing for a while). Problem is, i ended up spending too long on it, therefore defeating the point of doing a 'sketchier' piece this week, so i thought i'd try a character i was more familiar with; Batman. Kept this one really loose; open line, no solid blacks and just a loose greywash. You can see the Gambit over on my blog if you want.

I think this might be the first recurring character on the blog. Mooney already did a Batman a while back.

Dec.
Posted by Declan Shalvey at 2:17 AM

This may be my favourite thing you've done on the blog yet. It's certainly the most interesting. Love that you replaced the solid blacks with the gray tone.

I like it -- is it terrible my first thought was that it looked like he'd a stomach ache?
BTW regarding the 'finished' 'non finished', I personally don't care, the sketches are fantastic by all of you guys and ye draw them how you like.

Not going to complain about seeing a new Batman sketch. Really like your Batman. He has a bit of an edge to him without being too nasty. I like seeing a mixture of sketches and finished pieces.

I think this is great dec. lovely stuff and hope you are keeping all these for the art of declan shalvey! also I think you should leagally change your name to tuesdec shalvey. we can still call you dec or tues if you wish!

David; i think i could do a Batman sketch with my eyes closed at this point. Really like doing them.

Judy; maybe he DOES have a stomach ache.

Thompson; really? I figured you'd like this one alright, but favourite? It was nice to try. You probably like it cuz it looks more like my layouts.

Fran; i will take that under consideration. You can call me whatever you like sir. I also decided a while back that if i ever do an art book i'll call it 'Art Deco'.

lol Art Deco, I like!
I should just steal you for a day and get you to draw groovy sketches for me. Stomach ache or not, he's still pretty cool

This is DEFINITELY my favourite thing you've ever drawn.
Wowee-zowee.
Brilliant.Mood, economy of line, style, pose: love em all. I think you're getting better with every single one of these.

Good point Jac, Will has done a Wolvie twice.

I've no problem with car insurance... it's the ads that drive me mad.

Just to spite you i'm going to do a super-rendered intricately drawn A0 sized piece next week!!!*

It's the same reason Mazuchelli's Bats is my favourite, boils it down to the pure essentials.
Just.. pure... West.

Nice stuff. Man I love Batman Year one as ye know but I def dont think DM's Batman is the best lookin one. Not by a long shot. Best one ive seen lately is Lee Beremjos in Joker. Where you barely see him, the guys meant the be a shadow. Then when you finally do, he's as intimidating as possible

Yeah, but that's part of the story; That was from the Joker's point of view so you could do that. Saw him draw Batman in Lex Luthor; man of steel, and while his Bats is cool, it ain't Mazzucellis. Year one is something completely different, you HAVE to see him all the time, and even though you do, he is still mysterious.

Beautiful sketch, Declan. He looks down but not out just yet!

Yeesh ,change your tampon. I feel another Dec drawing coming up.

Nice work. But it's too sketchy

Have to admit, I thought exactly the same thing Bob

I think Bob was joking there Will.