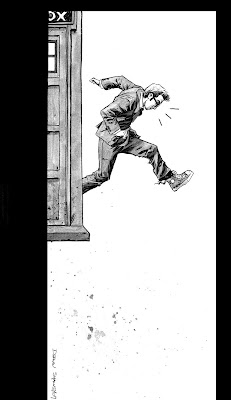 Even though i'm a big sci-fi fan, i never liked Doctor Who. When i was growing up, it just looked terrible to me. Watched some of the first season of the relaunched 'Who' a few years ago and it seemed like harmless fun. Have watched more of the Tennant 'Who' episodes and while i still can't claim to be a huge fan, i still can appreciate a family friendly show that is powered each week on smart ideas and that's what great sci-fi is all about. Gotta Star Trek sketch in mind for next week incidentally.

Drew Doctor Who this week mainly cuz when we started this blog, i wanted to take a stab at characters the other Micks have drawn. Nick drew some Doctor Who for IDW, so that's one down; six to go.

Dec.
Posted by Declan Shalvey at 2:22 AM

Great drawing. Really "feels' like Doctor Who. Nice composition too.

Couldn't resist that tiny pale-grey spatter-effect, could you? Like a guilty fart you hope no one will notice.

Incidentally, as-per the ongoing "your best piece so far" nonsense, I wish to state for the record that I've been using your "Rocketeer" as my desktop image for the past few weeks.

...though Bob's "pupeteer" came close to unseating it.

i agree with you about doctor who ive recently watched a few prime evil episodes, its like great effects, much better than who, i appreciate what they are doing but cant get into it.....aywho yeah nice work dec! good job

Really good, great composition. Would make a very striking cover I think. You're really pushing the grey wash here, you're bordering on painting.

Pronounce his chin a bit and youv got yourself a perfect likeness there. I like the idea of doing characters the others have drawn actually. Could be fun, just aslong as I dont have to draw a transformer, man they are feckin hard to draw

Never saw the appeal of WHO, other than one of the best theme tunes of all time of course. It looked like they made the sets during the how-to section of Blue Peter using only toilet-roll inserts and lollipop sticks.
Nice drawring though, cool compomosition.

Si; thanks for reminding me the best piece i did was the one i did SEVEN WEEKS ago. Guh. Indeed, i needed to get some splatter in there, but i thought it would be a bit too much doing it in black. In the same way, i kinda wish i'd done the 'zoinks' effect in grey too.

Will; note how i drew Nicks WHO and NOT a Transformer. I know his chin is more pronounced, but i wanted him to look a bit more gormless so pulled it back in a bit.

Thompson; it's really only 2 tones of greywash. A flat grey, then a darker one. I wouldn't really equate it to painting. The nature of doing a wash, rather than a spot grey on photoshop, means the flat areas have a bit more texture to them. It's still ridiculously simple.

think this would make a great bookmark dec. be a nice promo item to send out to clients in stuff!

Good gag, Dec. I like it! Surely there is no need to for anyone to draw Doctor Who now we have this:

Liam; i wish you'd told me that yesterday!

Fran; that's not a bad idea. I would *never* have thought of that.

Wow guys, i was telling Wiiiilllll earlier that i'm VERY impressed and jealous of this bloggy you've got goin on.

Seriously, the quality of everyone's work is incredible on a daily basis.

Dec, i'm gonna have this pic tattooed on my toned ass, as it's so bloody cool.

I dunno how you find the time to do this stuff with all your regular work...

I was always hesitant about the Doctor, with a particular dislike for the first 'new' one, Eccleston. A friend sat me down and made me watch the whole thing in one sitting.

Now I'm a fan. Nothing like prolonged exposure to brainwash the mind.

Great pic, good use of the space.

Even though I use the word 'space', I shall not make a TaRDIS joke.

Charco, ah i'd enjoy an episode if it was on now alright, i just wouldn't go to any mad effort to watch it is all.

Leigh, if you are jealous, then i am happy!

PS. Don't tattoo that fabulous ass. It's perfect as it is.

Oh, Dec...Give old school DOCTOR WHO a chance in order to see how quality scripts and a game cast can overcome budgets amounting to less than what's currently in your pocket. The problem is you need to know which cheapjack entries to spend your time on, and I'm happy to guide you. I'll be in touch.

Oh, and my mom loves FATHER TED and practically pulls her hair out when trying to come up with a logical explanation for how Dougal could possibly end up a priest.

Looks nothing like Tom Baker, but this is a nice picture nonetheless. Could be a little ganglier, but technically and coneptually, mucho tasty. Bravo, Dec-a-nek.