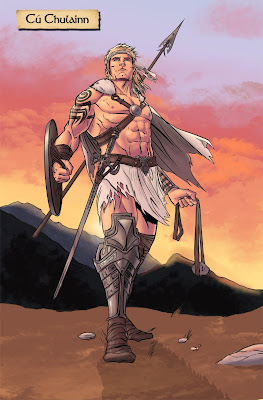 I think over the course of the last decade, I've written about ten Cú Chulainn stories. When I was in college I wanted to do a short film, when I worked in 3D I wanted to do an animation. Then, at the back of my mind for years, I've wanted to do a comic about him.
The beauty of the Cú Chulainn myth is exactly that, its a myth. With many different interpretations.

Early stories of the Ulster cycle deal with vicious heroes, dating back from the high middle ages.
Centuries later than that, the stories took a much more heroic stance. One to rival the Arthurian legends coming from across the Irish sea
In the late 1800's the Cú Chulainn stories centred around him fighting for oppressed people, reflecting our own countries struggles against the British at the time.

So with that I've decided on my own version. Its something that I'm going to tip away at in my own free time so expect to see the odd panel and character design pop up here on the blog.

I've drawn it very open line, as I'm going to leave a lot of the work to colour, something I'm getting more and more into these days
Posted by Will Sliney at 12:44 PM

I think you'd be just the man to give us a new retelling of those classic tales man, would love to see you follow up on this. Always been interested in working on an Irish legends comic myself.

Really nice, though you may need to take a second look at your shadows, they're a bit inconsistent with the light source and each other. I've a script about The Book of Invasions sitting in a flash drive somewhere- I guess it's just part of being a Mick!

Yep cool. will do Len. Cheers guys. Kind of have an unexpected day off today so Im drawing another page for the laugh

just wiki'd up on the character,
wonder if pat mills used him as the model for slaine?

Wiki - Cú Chulainn:
(...he was originally named Setanta,Setanta Sports (English pronunciation: /sɛˈtɑːntə/) is an international sports broadcaster based in Dublin, Ireland.Setanta Sports was formed in 1990 to facilitate the broadcasting of Irish sporting events to Irish expatriates.)

"He is known for his terrifying battle frenzy or ríastrad (similar to a berzerker's frenzy, though sometimes called a "warp spasm" because of the physical changes that take place in the warrior)"

Wiki - Slaine,the horned God:
"Sláine's most obvious source is Robert E. Howard's Conan the Barbarian, but Mills derived much of the background to the series from Celtic mythology and European prehistory (as in part did Howard: the name Conan is Irish and is borne by a number of mythological figures).[1] Sláine himself is named after Sláine mac Dela, the legendary first High King of Ireland, and his "warp-spasm" or body-distorting battle frenzy is derived from the ríastrad of Cúchulainn, the hero of the Ulster Cycle of Irish mythology. "Warp-spasm" is the term Thomas Kinsella used for ríastrad in his translation of The Táin. His barbed spear, the gae bolga, is also borrowed from Cúchulainn, although his favourite weapon, the axe, is more usually associated with the Vikings or Anglo-Saxons than the Celts."

Yeah inhave no idea how to draw the riastrad. It's literally Impossible.

Dont forget to mention that the warp spasm usually caused a massive erection.

Aha!!!
massive erection you say...
So we might be getting a Mick show & tell Penis theme after all?

Irish legends comic? sounds too snoozeville, there is so much more you can do with this character as not to have to stick to what has been told again and again and again.
Image teases untold adventures ! :)

Yeah it will definately not be sticking to the regular story Jay. It wull be sort of a retelling if you will