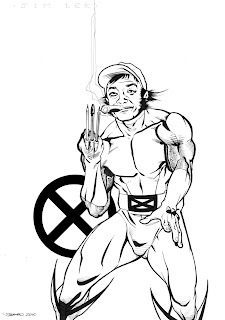 Tonight; on a very special episode of The Eclectic Micks, I've come here to tell you about a very special comicbook, by a very special man.
The  single comicbook that made me want to draw comics professionally was X-Men Issue 1 by Jim Lee and Chris Claremont. It was also the first superhero comic I ever read. Sure, I'd devoured all of the Tintin and Asterix albums as a kid, but I'd no idea at that point that I was reading 'comics'.
I didn't actually buy this comic until a year or two later(what a skinflint!), I merely repeatedly borrowed it from my friend, who was already a major fan of American comics. This stuff blew me away, it was just so well crafted. Handsome heroes and beautiful heroines in incredibly outlandish situations chock full of derring-do. And oh my, the boobies.

It wasn't util a few years down the line that I really came to appreciate the incredibly solid draftsmanship and storytelling abilities of Mr. Lee, I just knew that the artwork APPEALED to me incredibly, and that I couldn't stop looking at it; studying it.

It was the first American superhero comic I'd ever read, and its fair to say it blew me away. I had drawn a fair bit as a kid, but once I saw this book I spent hour after hour, day after day trying to replicate what I saw on the page. I was utterly inspired. And I knew what I wanted to do for a living.
The rest of Jim's x-men run followed, then WildC.A.T.s, Deathblow, Fantastic Four, Batman, Superman et al. To this day he's still my favourite comics artist(alongside Adam hughes) and I devour everything he puts out there.

I actually got to hang out with the guy for an hour or two at the Dublin Comic Con a couple years back, and he couldn't have been more courteous and friendly. We shot the shit about our ladyfolk, hilariously.
Earlier that day my then girlfriend(now wife) Jackie had approached him and asked him to draw me a Nightwing piece in my 'Hush' hardcover, since it was my 30th birthday and she knew it'd mean the world to me.

The fact that he cheerfully obliged(even though I'm pretty sure he was about to try and eat his lunch) just pushed my pathetic hero-worship further over the edge. Whomever said you should never meet your heroes can kiss my fat hairy arse.

And that's my heroic story. 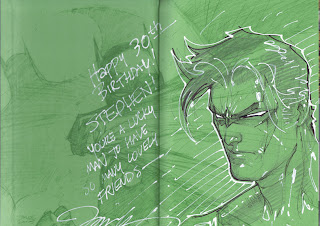 Posted by Stephen Mooney at 2:05 PM

And I still love that your opening line when you met him was "I used to love your art...". Classic Mooney.

Wow. That's the most sincere and emotional post you've ever made.

I gave Jim Lee a lend of my brush at the Dublin Con. Never got it back. Not such a nice guy now, IS he?

I didn't bloody say that, Thompson!
I said"I loved your art on X-Men-' when he cut me off with'but not the newer stuff, eh?' or something along those lines. He's obviously heard that an awful lot. I then went on to tell him that what I'd been going to say was 'I loved your work on X-Men, it's my favourite stuff ever, but I love the Batman stuff too'.

That's truly a beautiful thing...
'JIM LEE' is the Man!

Have any of you Micks recieved any such Hero-Worship yet yourselves?

I like Thompson's take on what you said honey...his version is always much better than the truth! Also go me on the Hush sketch... :P

Aw that made me feel all warm and fuzzy