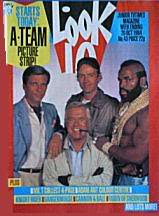 So. my first hard introduction to the art of sequential story-telling came in two forms. The first was 'Playgroup' comic, a nursery title that had stories from Thomas The Tank Engine, Sooty and Sweep, Mr Men, the Nordic fatalist nightmare that was The Moomins, and the ever-popular, never-to-be forgotten Wimpole Village. I can find no evidence online that this periodical ever existed, but my Wimpole Village alphabet Wall Freize (missing 'F', 'L', 'Q' and 'T' through to 'Z') says otherwise.

The stories in Playgroup weren't comic strips per se; they were numbered panels (so us tots could use our newfound numeracy powers) with colouredy drawings set above simplistic text that described the action. And up until well after I started reading Transformers comics in late 1986, that was how all my self-penned stories were displayed. The evolution into speech balloon use was a quantum leap I was yet to make.

The other big influence on my was 'The Junior TV Times', better known as 'Look-In'. 'Look-In' was a catch-all magazine for all things kiddy and pop-culture in the eighties. It mainly pimped ITV-based TV shows like Supergran, Terrahawks and The A-Team, but it also had articles on films, music and gave away Back To the Future sticker albums.

Playgroup and Look-In came into my orbit every sunday morning as myself and my little sister Fat 'Fattie' Laura were brought down to visit our grandparents and watch my gran wrestle with the logistics of preparing Sunday Lunch. We were taken to Dick Whelan's newsagent on Wexford's Main Street, bought a Milky Bar each and given our respective periodicals to peruse in silence while my mam used to show her mother the bruising around her face from another set-to with the man I was forced to call father.

While also starting me on my journey of panelling out my homegrown tales of nonsense, 'Playgroup' and 'Look-In' probably cemented the notion in my brain that television is very, very important. I'm sure ITV was cack even back then, but the fact that it was where I watched Transformers, Knight Rider, Robin of Sherwood, Hardcastle & MacCormack and all the ace Cosgrove Hall shit, meant that Look-In was essential reading to me. Especially when they ran a Five Star Comic strip.

So, culled from the pages of 'Playgroup' and 'Look-In', I present to you my superteam: The Inspiratorialables! Mr Tickle! Michael Knight! Robin of Sherwood! Cannon AND Ball! And a Moomin with his pervy little midnight-sun buddy, Dunnohisnameson. Together at last! 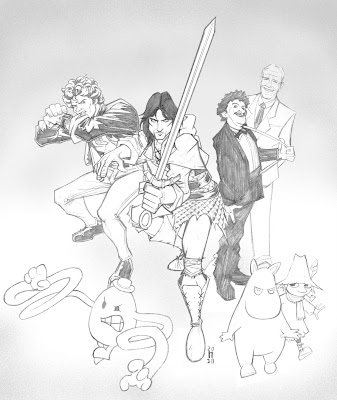 God bless TV! And may He have mercy on all of you who had to make do with Bosco.

Ah..."Look-In"
Now,that was a classic 80's Kid's comic.I remember it well.
Loved The Robin Of Sherwood,Supergran,Terrahawks,Star-Fleet and The A-Team Comic Strips that were in there.
They looked very grown up,well drawn...hard to find in UK comics back then...innocence,Before the days of "VIZ"
But always pissed off with some of the Baby-ish crap that somehow slipped in there too...
Like Cannon & Ball & Madness ?!?!
WTF were they doing there ???

Great post, at least 3 of my ribs were tickled.
Funny, funny stuff. And probably my favourite sketch I've seen from the Sunday Roche.
Rohh-bin.... the hooded man.

Ahhh...they don't write them like that anymore!
Best thing Enya ever sang really,
Better than that 'Orinoco flow' shite!

I wonder if I should put a disclaimer here about the spousal abuse stuff from back home...that shit's TOTALLY made up. My famille are the friggin' Waltons. It's ridiculous how idyllic the Roche upbringing was. Just thought I better nix that 'joke' before it becomes internet fact.

Thanks for the comments though! And glad I've tooked the Moonbox this week too.

I picked up a couple of the Look-In annuals from the pound shop earlier this year. Man alive, but Arthur Ranson can draw.

I wish I'd valued comics like this a lot more when I was younger. Look-In, Starblazer. Hell, the girls' comics! So much to love and so much to learn from. Ah, well. There's always the pound shop.

Look-in, yes eventually got to read it after my sisters had torn out " Hot Guys of the week" posters form it, my brother cut out all A-team and Knightrider reference and what I was left with was something like a disabled paperchain. I didn't mind as my older brother used to get Rampage which was full of Marvel comics :), this I read, copied and adored. thanks for the mammarys!

Wot, no Sapphire and Steel?: http://www.animus-web.demon.co.uk/sapphireandsteel/stripsindex.html

Holy shit I owned that exact copy of Look In. Glory days!