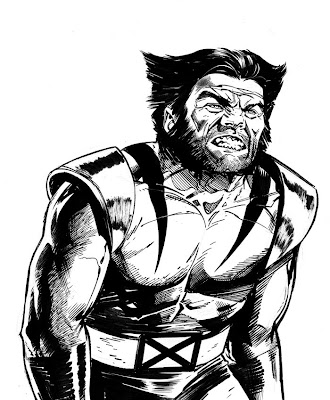 Yep, more X-men, more Jim Lee. Although I'd read lots of comics as a young kid (mostly black and white British war weeklies and Ninja Turtles comics) it wasn't until I set eyes on some Jim Lee issues of X-men that I decided I wanted to draw comics for a living. Before that I had planned on being an animator.
Actually when I was younger I don't think I even realised comics were drawn at all, I just took them at face value. Kind of like how as a kid I didn't notice that Han Solo and Indiana Jones were the same guy.
So one day, while I was in a friend's house playing Lemmings on his Amiga, I noticed this stash of American comics. I think they were mostly Jim Lee X-men's and some of the early Image stuff like Spawn. I borrowed them off him and took them home, then a few days later a slightly pissed off guy came knocking on my door. This turned out to be the actual owner of the comics, fabulous Fran Johnston.
Once he realised I was a fan he supplied me with more of the good stuff. I have a distinct memory of reading Wildc.a.t.s one on the walk home from his house and completely overshooting my road, ending up halfway to our local shops before I took my head out of the comic.
Posted by Stephen Thompson at 6:44 PM

You wanted to be an animator?!
And yet you spent all your time in animation college drawing comics.... ironic.

Heh, whenever Wolvie is on the blog he always looks like hes up to something strange (mostly due to Mooney). Hes taking a dump here

Heh, yeah. He does look like he's squeezing one out alright.

Yeah but he's the best at it.