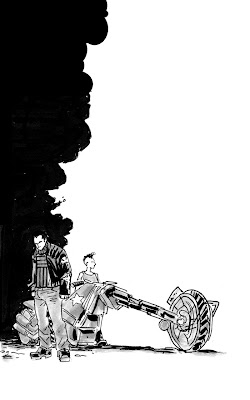 Fought the urge to do a finished drawing this week and decided to put up an ACTUAL sketch for once. This was the layout i came up with for the Dublin City Comic Con that was supposed to be happening in a couple of weeks. I actually did finished inks for this too, but i really like the layout in itself, so here it is. I think it was too big originally (lots of text was gonna be added), so i shrunk it down a bit and badly photoshopped in some extra cloud at the top.

UPDATE: Actually; screw it; you can see the finished inks here if you want.

I think it's funny how cartoony the little bit of smoke that you did in Photoshop is compared to your hand drawn parts.

I know this! Very nice Dec... and props to Sean as well for the design

This kind of information is very limited on internet. Nice to find the post related to my searching criteria. Your updated and informative post will be appreciated by blog loving people.

POSTER LAYOUT <-- that's what i was looking forFinance Dissertation Topics

Thanks for sharing superb information. Your site is so cool. I am impressed by the details that you have on this site, CLAD, HP0-J60, 200-001