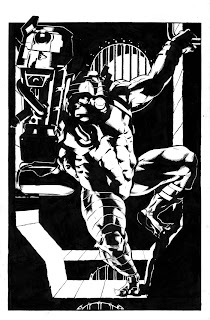 So here's something from the vaults that dates from the dying days of the 1990's. Possibly. My memory is very hazy about this. It's definitely one of the Ninja Turtles, probably Donatello. It's based on some hideous re-design where he has a gun for an arm, either from the old Image comic series or from a range of action figures. I think I did this for some competition, or maybe just to try and get some fan art published in the comic. I do remember it was the second picture I ever inked with a brush, the first being a shot of Qui Gon Jinn.
Posted by Stephen Thompson at 5:51 PM

Gotta love the turtles. This guy aint a hero in a half shell though. Cz he aint got any. Great lighting on it

I remember the Qui Gon one, but not this. Quite like the inking. I thought the turtles comic you sent a pic to was way before this, like when you were in your teens?

Why is his toe so shiny? Does he have cyber-toes?

No that was when I was about 10, I got two pictures published in the British reprint Turtles comic.

He has cyber-everything if I remember.

Have you seen this?

It's a sort of crisis on infinite shells thing with the 80's turtles teaming up with the 2003 turtles and it looks like the ones from the Eastman and Laird comics are in there too.

Ah, those are the ones I've always wanted to see Thomps. Next week's post methinks?