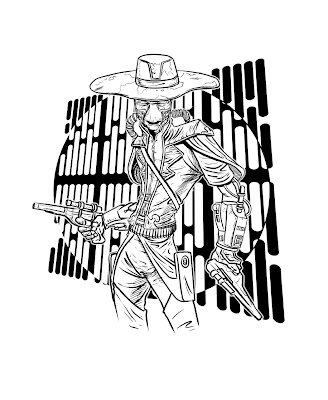 Any of ye out there watching the Clone Wars. I thought (especially on seeing how it started) that the new 3d Clone wars wouldnt be a patch on the Original Cartoon Network series, but since the mediocre movie it started with, every single episode has improved. By the time it hits late season one the show its turning out some really great episodes and Season two starts even better. Infact I would go as far as saying it adds a lot more to the folklore than the Cartoon Network series did. Heres Cam Bane from the show, who replaces good ol Boba as the most badass bounty hunter in the galaxy. I hope the guy gets his own series.

By the way, just as a reminder, apparently Forbidden Planet in Dublin are hard at work rearranging the shop for our siging there. It should be a blast! I'll be sporting my Ireland Jersey for it!
Posted by Will Sliney at 3:36 PM

Shouldn't Cork have their own jersey?

Shockingly, my referance to supporting Ireland in one of our biggest sporting matches in years has gone right over your head Thompson. :)

True, I don't even know what sport it is or who Ireland are fighting. Let's just hope both sides have a fun time.

Sigh.
Nice pic Will, have yet to see the new series but have heard great things about it alright.

Great sketch. I dunno the character but it looks great.

Is Saturday just signing or will there be sketches?

Reckon things will be moving pretty quickly on sat David, so it could be a case of maybe headshots on the inside cover of the books or the like. All depends on time available really.

Hey David, were not sure. We dont want big long queues at the tables in forbidden planet. Though idsay each person will probobly get to crack out a few. Maybe even in the Twisted pepper afterwards

That drawing makes me want to watch the clone wars(never thought I'd ever write that sentence).

love the pic,
looks much better than the spindly excusae for an action figure they've put out...
not that i buy action figures,
i'm a grown man.

love the effect in the bg,
clever that.