"I think he can hear you Ray". 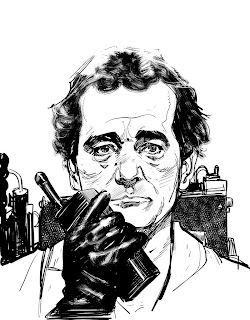 Watched Ghostbusters again recently, practically perfect film in my opinion. It's weird hearing about the first version of the script where it was set in the future and there were many teams of Ghostbusters. Or that Eddie Murphy was going to play Winston Zeddemore originally. Somewhere there's a parallel universe where Eddie Murphy's a Ghostbuster, Tom Selleck is Indiana Jones and Christopher Walken is Han Solo.
Posted by Stephen Thompson at 3:23 PM

Love that man. He really is one of the best people alive. If further proof was even needed - http://tinyurl.com/yhn7st3

I always thought he'd make a wonderful Krusty the clown if they did a live action Simpsons.

Crappola that link didn't work try this one - http://tinyurl.com/yhn7st3

Awesome. I really love that movie. I had problems installing my manga studio materials. I must sort that out and give them a proper lash soon

I love the texture in the hair and the gloves. You also perfectly captured his expression. Good work. I do have to admit I'd be pretty creeped out if I saw him as Krusty. But then again Krusty in real life would look more like one of the Killer Klowns From Outer Space.

Looks a little of Sylvester McCoy (the 7th Doctor) - but then again I am always associating things with Doctor Who far more than is healthy!

My favourite comedy of all time. Great Murray. Look at his hangdog expression, let's get him a present.

This is my favorite character because he was like a stupid man but it liked me a lot, and also he was the most passionated.